For those people for whom 26.2 miles of asphalt is too easy, how about doing it underwater wearing 120lb of old-fashioned diving suit?

"I've had to cope with poor visibility, which has at times been nil, I've had to work against the resistance and the pressure of the water.

"You don't know what's underfoot - sometimes its mud, silt, rocks or nothing.

"The airline also kept getting caught and I also had to deal with a build-up of carbon dioxide in the helmet. It's also very cold and very lonely." 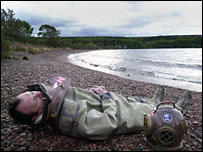 In something of an understatement, this guy, quite possibly a lunatic, admitted: "It's definitely been far more difficult doing it underwater than it has been on land."

I used to dive and I think I would go stir crazy if the visibility was bad for that long. I can't imagine what his decompression time must be. Crazy.