I'd just love to stop getting postcards and e-mail relating to marathons I'm so not going to run this year.

Lovely morning. And the day's only half gone.

I love the day the clocks turn back. I deliberately try to forget about it, so I get up at my usual time and get surprised by the extra hour. It didn't work today, but I still got up in time to gather six garbage bags of books, household stuff, yarn - yes, the guilt of the unfinished projects was getting to me - and drag them to Value Village. I love getting rid of stuff. Since P and I moved in together, almost two years ago now, I reckon we've gotten rid of about 60% of our possessions. We still have too much, though.

And then I went running in Discovery Park. It's just so beautiful: you'd think sometimes you'd ended up in Neah Bay, out on the Olympic Peninsula. Sunday mornings it's full of happy dogs and quiet couples. The leaves are still rich and gold, the air was crisp, and it was a fantastic day to be running the trails. I'm going to try to make it out there every weekend: not only is it a wonderful place to visit, and a great change from the neighborhood streets, but the softer trails and the frequent hills can only be good for training.
Posted by Riona at 3:32 PM 3 comments:

The lovely Lara over on her snazzy new blog - see, I have been away a while - tagged me for the 5th sentence of my 23rd post.

Every time I'm in San Francisco, I walk across the bridge, and am continually awed by the scale, the setting, the extraordinary engineering of it.

Here's the deal:1. Go into your archives.2. Find your 23rd post.3. Find the fifth sentence (or the closest one to it)4. Post the text of your sentence in your blog along with these rules.5. Tag five other people.

A perfect autumn day in Seattle

I've been the worst blogger ever. Haven't been updating, haven't been reading, still owe the wonderful Scott a mail about Vegas, feel totally out of it. Wanna catch up soon. Life with the new job has been pretty much work and sleep. I rarely leave work before 10 these days, and I'm back in before 9. I'm hoping it won't last long - I'm getting extra help - but let me tell ya, it's not helping the training schedule any. Progress back to pre-injury levels is painfully slow and I'm not getting in all the time I want. 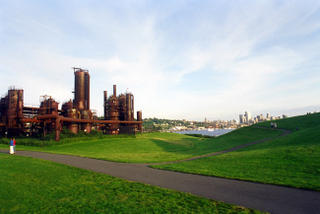 But today I did a four-mile run (with, ahem, a bit of walking) along my beloved Burke-Gilman trail to Gasworks Park. Have you ever been? It's perhaps my favorite park anywhere, ever. Hulking rusted gasworks loom against little hills and sparking water, and the Seattle skyline. It's the perfect example of how industrial scenery, and things that were never, ever meant to be beautiful, can break your heart. Today, the little store by the water fountain was closed for the winter, but the sun was shining, kites were flying, and the lads were riding unicycles along the winding paths. And even in October, there were still a few blackberries on the bushes.


In other news, we sent got our save-the-date cards and sent them out into the world: 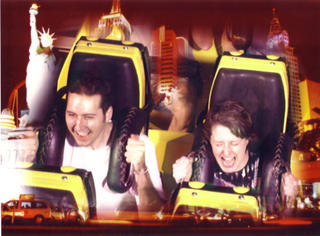 After runners were forced to stop and wait as two trains made their way through East Moline on Sunday, Joe Moreno sped over to an intersection near the 22-mile marker and parked his truck on the railroad tracks, blocking a third train from passing ...

[He then] sat in the vehicle with the doors locked for nearly 1 1/2 hours as several hundred runners crossed the tracks. A railroad employee tried to get Moreno to move his truck, but it wasn't until police arrived that the former East Moline mayor agreed to move the vehicle.

"With every minute, I was buying time for the runners," Moreno said.

Come Back to the Big Easy

In an unprecedented move to assist with the rebuilding of New Orleans, the 41st running of the Mardi Gras Marathon and Half Marathon will donate all net proceeds to a special Hurricane Katrina Fund called "Back to the Big Easy". This fund will give ALL NET PROCEEDS from the Mardi Gras Marathon, Half Marathon and 5K to local charities based in the city to help with the Big Easy recovery efforts.

It's next February. Full article here.

Slow and steady does not, actually, win the race. But it does keeps you in the race, and that counts for a lot.

I've been a bad blogger, and haven't been updating. Truth to tell, I've had little to say; there hasn't been a lot going on here at I Run Seattle. I've started a new job - at the same company - which I think is going to be very challenging. Last weekend we took a wonderful road trip along the Cascade Loop. I'd done this drive before - it's magnificent - but never in the autumn. The whole landscape was golden, the light was ethereal, the apple trees were dripping with fruit, and the wine tasting was casual and delicious. Go when you can.

I'm just back from my first official post-fracture "run". I've been working out at the gym a little bit, walking for an hour on an incline, but today was my first technical day out. It's sobering to realize that pre-fracture, I could run ten miles and now, about eight or nine weeks later, I can't do two miles without stopping to walk.

Here's where keeping a training journal or blog really pays off. Looking back to when I first started training, back in April, I couldn't run much further than I can now. It's encouraging to browse through the entries and realize how a little effort really does pay off, and gradual increases in mileage really add up. Almost before you know it, really.

So here is my rough plan.

I'm going to follow Bob Glover's beginner schedule for the next six months, gradually building up mileage to 30 miles a week. Only then will I start thinking about marathons.

I'm going to lift weights three times a week. This is for two reasons. Firstly, I have to fit into the wedding dress I bought on my trip to Ireland. I have determined weight-loss goals to get me down to my fighting weight. A measurement of my determination is that I am allowing myself wine or other drinks only 1-2 nights a week. Nice dresses do, after all, require superhuman sacrifices. Secondly, Jon's recent entry made me think a lot about my running form. It's awful, and reading tells me a lot of that can come from weak muscle structure.

Now I am going to shower and get ready to go out. I have a waxing appointment at a salon today, and that means that today is not only a wine day, but a Quick Glass of Wine and a Couple of Extra Strength Tylenol, knocked back at a rate unsuited to a lady, day.
Posted by Riona at 11:08 AM 9 comments: