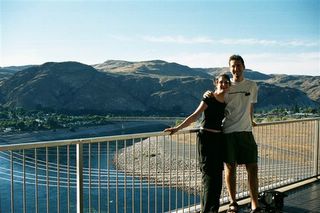 ... So I've kept on track for two weeks (though I missed the gym). Only 29 weeks to go after this! And Sunday is my first road race, a 5K at the Over The Dam Run at the beautiful Grand Coulee Dam.

I think this dam, along with the Golden Gate Bridge, is one of the most beautiful of all human constructions. Every time I'm in San Francisco, I walk across the bridge, and am continually awed by the scale, the setting, the extraordinary engineering of it.

My dad is a civil engineer. When I was growing up, I didn't like his job. He was always designing roads or bridges or water treatment works, none of which seemed very glamorous to me. But now, if I had my time over, I think I'd become a civil engineer. Is there any other profession that has contributed so much to the human race? Doctors can do their best to cure disease, but until people have clean water and sanitation, they're just fighting a losing battle. Scientists can genetically engineer crops, but unless there's irrigation, people will still go hungry.

I hear people talk about the benificence of nature, but at best she's indifferent. Everything humankind has done has been in defiance of nature.

Tomorrow we'll be in eastern Washington, an arid dustbowl until the Grand Coulee Dam made the desert bloom.
Posted by Riona at 4:19 PM

Good luck in your race!! Found you on runner girl!! my blog: alaskamarathong.blogspot.com