The Hutterites dress modestly, and live much like the Amish, in Manitoba.
Read the full article. 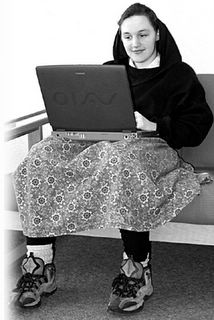 In Prospect Park, in Brooklyn, I have seen a couple of Muslim women jogging in burkas, and Orthodox Jewish women walking briskly, clearly for exercise, although not jogging, in long-sleeved blouses, ankle-length skirts, and wigs. I've seen one Orthodox woman wearing a snood while jogging.

I find it simply amazing. I had to get over feeling self-conscious about running in front of other people, since I'm pretty slow, and when I started I was overweight. I can't imagine what it's like to decide to go out running in such conspicuously different dress. I think it's really remarkable.

part of the religious aspect is that they are called to live a life that is particular in contrast to the world. they should stand out, be considered strange by the world's standards.

i think it's wonderful, if done for the right reasons.