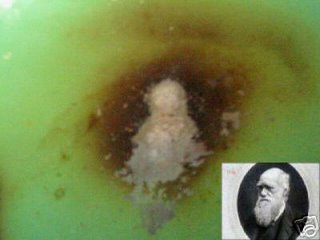 From London comes the astonishing news that the unmistakable image of Charles Darwin has appeared in the bottom of a postdoc’s frying pan. Scientists around the world1 are puzzled about the possible mechanism that might have resulted in the 19th century naturalist’s portrait being deposited on the suface of a cooking utensil.

In one attempted application of the Explanatory FilterTM it was found that the probability of this occurance is less than that of fairy circles appearing to form a mole on the face on Mars2. (This is, coincidentally, precisely equal to the probability that Nicholas Caputo would have hit David Berlinski if he had fired an arrow at Albert Einstein’s door during a total solar eclipse.)

It's a miracle!!!
Scratch that. It's a highly improbable event that's come to fruition.
I once had a plate of scrambled eggs that resembled my mother in law. My appetite turned south at about that same moment. Damn her, for not being a celebrity or even a "well known woman of science." Coulda made a bundle on Ebay.

I just came across your blog and wanted to drop you a note telling you how impressed I was with the information you have posted here.
I also have a web site & blog about mortgage calc so I know what I'm talking about when I say your site is top-notch! Keep up the great work!

I was expecting something different when I visited your blog. Well I think the information on this blog is great. I have my own blog and I wish I got half as many comments as your blog does. Anyways, I am a fill in teacher at a local high school and I am always doing research on various areas of interest. This weeks topic relates 85% to your blog. I already bookmarked you for future use. If you want to exchange information I will leave my link at the bottom of this. If you don�t mind I will add my 2 cents to this blog topic once in awhile. Although most of the time I just like to read and see what other people�s thoughts are! (hey I am a teacher!)
Thanks again!cheap personalized wedding favor.

Hello! While I was searching for info on wedding planning help I somehow landed here. I am certainly glad I stopped by for a read. While I am here, I just wanted to drop a quick note to comment your blog...now to move on and continue my search for wedding planning help. Thanks for the post.

I was just searching blogs,and I found your site, Friend! I like it!
Please accept my compliments and wishes for your happiness and success.
If you have a moment, please take a look at my site:
used car web site
It pretty much covers used car web site related issues.
All the best!

I just came across your blog and wanted to
drop you a note telling you, Friend, how impressed I was with it.
I give you my best wishes for your future endeavors.
If you have a moment, please visit my site:
used car web site
It covers used car web site related contents.
All the best!

Nice way to convey information on cooking tips i'll keep checking back here for more informative reading . Thanks Alot for the quality reading.